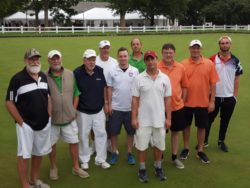 A field which included five current or former National Champions toed the mat for the Otto Hess tournament.  (Otto always claimed everyone spelled his first name backwards, so if I have done the same, sorry ottO).   After slogging through a rain drenched morning, the skies cleared and the sun shined on a pair of National Championship qualifiers, Rob Behncke and Jim Grzybowski.  They finished in first, beating out veteran Team USA players Bob Schneider and Joe Zinna who finished second.  Mark Mathwig, Dat Ngyuen, and Dat’s afternoon substitute Max Cavender came in third.  Even with the soaking rain, the greens held their speed nicely.  This is a tribute to all the hard work of head greenskeeper Bob Schneider and his crew of assistants.

Unfortunately, one team had to be disqualified for violations of the uniform rules.  As you can see, their shirts clearly do not match.  Bubbles, the player on the left claims to be Canadian, but he still hasn’t said he’s sorry, so this nationality is highly doubtful, (and there have been rumors that he is overly fixated with kitties).  The player on the right says he is a native of the planet earth, but this is also questionable. After all, he admitted that his first name is Weird.  The investigation is still in progress.  Be on the lookout for these miscreants.  They might try to enter a tournament near you.